No, thank you MAM... did open-source kill Sun? 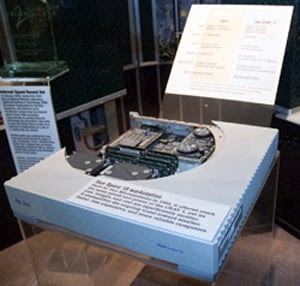 A few years ago I was given a Sun Ultra 2 3D Creator Sparcstation, vintage 1999, with a then-whopping 1.5GB of RAM, two hard disks and two Sparc processors.

But, it lacked a monitor, and playing with it over RS-232 wasn't too much fun, and I lacked a user account so there wasn't much to do with it.  It sat on a shelf as part of my collection.

Recently I was offered a huge Sun CRT monitor, and it turned out to be compatible.  (And easily 125 pounds.)

It still left the issue of lacking a user account.  Without system disks, it was impenetrable.  But what I saw was purty...

So I decided to burn a bunch of Solaris 10 update 7 CDs one evening, and start from scratch.  I think the thing had been running Solaris 7 or 8.

Well.  Turns out, with Solaris 10, Sun was deprecating its previous GUI, the Common Desktop Environment (CDE), in favor of Gnome, with which I'm familiar from my Linux usage.  Not a fan of Gnome... so I tried CDE.

And CDE is awful.  It's not what the machine was running before, which seemed airier and more responsive and a whole lot less clunky.

Meanwhile, Gnome is... Gnome.  It's hard to imagine someone spending what this machine originally cost and feeling satisfied with that environment.  It's just nasty.

And despite its great honking 10,000 rpm SCSI disks, two 300MHz 64-bit Sparc processors, and a clock-doubled S-Bus architecture, the thing's a damn slug.

Just abysmal.  I could not be less impressed.

I call it my Mac Appreciation Machine.  Howdy, MAM.

I wonder how the move to Gnome factored into the demise of Sun.  Premium machines, hard-core.  Costly.  Not for home use.  Not for Aunt Min.  Heck, its noises alone would give her the flapping vapors.  No, it's a top-drawer tool for serious professionals.  Yet there it is, glaring at me with the same unpolished face as some crappy netbook running Ubuntu.  Complete with Star Office, seemingly identical to the open-source OpenOffice.

Both Sun and Apple, with OS X's NeXTSTEP-based innards, leveraged the open-source BSD UNIX as their foundations.  In Apple's case, the generic/open-source-y inner UNIX giblets are cloaked with a sublime and solid proprietary user interface with lots of unique and thoughtful goodies built in.  Nothing of the sort with the Sun, at least with Solaris 10u7.  Interface- and usability-wise, I see nothing here I couldn't get from Mandriva or Mint for free, today and maybe even back in 2001 when Sun first started edging towards Gnome, and certainly by 2007-2008 from whence this version of Solaris sprang.

Though it remained (and remains) well regarded in the server space, Sun summarily disappeared from desktop usage, and I wonder if Gnome was a symptom or a cause.

My thought: as in every business endeavor, differentiation is everything.  Whatever other problems Sun was battling in the market, it also lined up a chunk of its differentiation carefully in the cross-hairs and blew it away by adopting an open-source persona for its machines.

It seems my thoughts both parallel and oppose those of Scott McNealy from exactly a year ago.  On the one hand, the interviewer refers to the "open core" of Sun's products, which could have excluded the user interface.  And McNealy notes, "We probably got a little too aggressive near the end and probably open sourced too much and tried too hard to appease the community and tried too hard to share... You gotta strike a proper balance between sharing and building the community and then monetizing the work that you do... I think we got the donate part right, I don't think we got the monetize part right."

But he doesn't mention differentiation.  And if McNealy & Co. were prescient in stating that The Network Is The Computer, maybe they missed appreciating that The Interface Is The User Experience.  And on MAM, with Gnome, that's nothing special.
Posted by Scott Jordan at 5:16 PM